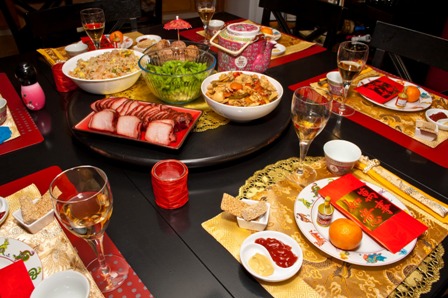 The Chinese New Year is also called the Spring Festival or the lunar New Year and is one of the most colourful festivals in the world. The New Year is an occasion for family members to reunite and welcome the year ahead, with a variety of traditional food, customs, rituals and cultural activities.

The 15-day long celebrations have several myth and beliefs woven around them. Each day denotes certain customs and traditions…

First Day: The first day of the festival is an occasion for honoring the elders and welcoming the deities. The Chinese visit the elders in their family and pay their respects to them. Some people also abstain from eating meat on this day. Second Day (Kainian): The second day is the birthday of the Chinese God of Wealth. It is also a day for married daughters to visit their parents’ and relatives’ houses. It is also believed to be the birthday of all dogs and they are, therefore, treated with special foods on this occasion.

Third Day (Chikou/Chigau): This day is considered to be the day of the God of Blazing Wrath. It is traditionally believed to be an inauspicious day. Chinese believe they should not visit friends and relatives on this day. Instead, they visit the Temple of Wealth and have their futures told.

Fourth Day: The fourth day is of the most importance to those communities who observe the New Year period for three days. This means the fourth is usually the day of spring dinners. On this day, son-in-laws pay their respects to their parents-in-law.

Fifth Day (Po Woo): The fifth day is the day to eat Jiaozi or dumplings – a traditional Chinese food – which they believe will bring wealth and prosperity. On this day, people will not visit relatives and friends as it is believed the act will invoke bad luck.

Seventh Day: The day is known as Renri, which means the common man’s birthday. On this day, every Chinese is believed to grow a year older. It is also the day marked for eating whole fish and noodles in certain communities who believe fish represents abundance and noodles longevity. In addition, farmers display their produce on this day and celebrate the day with a drink made of seven vegetables. For Buddhist Chinese, it is a non-meat day.

Eight Day: This day is associated with the Jade Emperor. A family dinner is hosted on the eve of his birthday. It also marks the end of the holiday season, meaning everybody goes back to work on this day. Traditionally, employers host a lunch for their workers on this day.

Ninth Day: The traditional birthday of the Jade emperor is on this day and, from midnight of the eight day onwards, some communities like the Hokkiens hold prayers and offerings to their God.

Tenth Day: Certain other communities celebrate the Jade Emperor’s birthday on this day.

Eleventh and Twelfth Day: These are the days when the Chinese visit their friends and invite them and family members for dinners at their homes.

Thirteenth Day: This day is dedicated to Guan Yu, the Chinese God of War as well as Success. He was the most successful general of the Han dynasty and therefore, traditionally all business houses and organizations pray to Guan Yu on this day. The Chinese eat simple vegetarian food on the thirteenth day to cleanse the body.

Fourteenth Day: This day is reserved to prepare for the Lantern Festival of the next day.

Fifteenth Day: This day is celebrated as the Shangyuan Festival or the Lantern Festival – a day of lighted lamps. The Chinese light lamps and candles and keep them outside the house, to guide the spirits back home. Families also walk in the streets with lighted candles or lanterns. Chinese eat rice dumplings on this day, as the food represents reunion. Some communities also eat tangerines (Chinese oranges), as they believe it will bring prosperity.