27th November 2022 – (Windsor) A woman who has been labelled as ‘the world’s best catfish’ on TikTok due to her amazing ability to transform her appearance has revealed how she makes herself look years younger with the help of makeup – and tape.

Chloe Fountain, from Windsor, Canada, who hasn’t revealed her age, often leaves her viewers stunned when she posts videos of herself before and after she puts on her glam to the video streaming platform, where she has racked up more than 991,000 followers.

According to the popular internet star, she looks so different with and without makeup on that some people on the app have accused her of using filters or editing the videos to enhance her appearance.

Others are convinced that she enlists a second person – like a secret daughter – to trick them into thinking that it’s her in both the before and after clips, but she has insisted that it’s really her all the way through.

‘WTF just happened? There’s no way you’re the same person. That has to be her mom,’ she wrote in a recent video, while showing off some of the comments she gets from her followers.

The TikTok, like many of Chloe’s videos, started with her looking at the camera sporting her all-natural beauty. Her skin had some wrinkles and spots, and her hair looked messy.

It then cut to another clip that showed her with a full face of makeup on. Her complexion now appeared much smoother, her lips were plumper, and her hair was neater.

‘It’s me. No makeup and makeup,’ she insisted in the video.

‘I’m just really ugly without makeup I guess lol,’ she captioned it.

While chatting with Newsweek recently, Chloe reiterated that every one of her videos is ‘100 percent truthful,’ but admitted to trying to make herself look messier than usual in the ‘before’ portion of her TikToks.

‘I would say I make myself look slightly worse than I normally do. [If] I’m extra puffy because I’ve slept on my stomach, [then] I’m like, “Today would be a good day,'” she told the outlet.

When it comes to the backlash she has received over the TikToks, she said she finds it ‘funny,’ and that she understands the disbelief since it’s such a ‘dramatic difference.’

She explained: ‘I find it kind of funny. It’s obviously a dramatic difference, and sometimes, seeing isn’t believing, especially on the internet.’

According to the beauty influencer, her go-to product is Peter Thomas Roth’s Instant FirmX Temporary Face Tightener, which costs $49.

‘Put a thin layer of that on because it will leave a film. Just put it on really thin, and voila. The Peter Thomas Roth really is as realistic as I make it look,’ she continued, adding that she is not being paid to promote it.

She also uses tape to pull back her wrinkles, which she then hides with concealer.

‘Wrinkles do cause shadows, so if you pull them back, your face will look lighter,’ she continued to Newsweek. ‘The makeup and the tape can 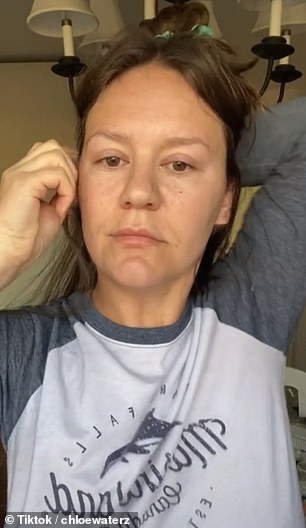 ‘I put the tape behind above my ears so it pulls back my smile lines and my skin lines,’ she explained in a TikTok video. ‘People think it’s a scam but I’m just pulling the wrinkles back’

‘People even comment saying, “I bought the tape and it really does work.” You get the ones with the strings that really pull you back. It stays on all day for me.’

She did not specify which brand of face tape that she uses.

‘I put the tape behind above my ears so it pulls back my smile lines and my skin lines,’ she explained in a TikTok video. ‘People think it’s a scam but I’m just pulling the wrinkles back.’

In her videos, Chloe has listed some other products that she loves, including Charlotte Tilbury’s $44 Hollywood Flawless Filter and the $8 Maybelline Instant Age Rewind Eraser Concealer.

‘I also like L’Oréal’s Infallible foundation powder because I find it’s better on older skin than liquid foundation, which sets into your wrinkles and causes them to protrude more,’ she previously told the New York Post.

People often flood the comment section of Chloe’s videos with their disbelief, with one person writing on a recent video, ‘Are you mom and daughter? ‘Cause that change is some right witchcraft darling.’

There’s no way on this Earth,’ said someone else, while a different person added, ‘Nope. Def not the same person, what a lie.’

‘Still can not believe it. I think she is your mom,’ read a fourth comment.

‘And this lads, is why you always take a first date out when its heavy rain,’ joked another user.

Chloe previously addressed her haters to the Post, explaining that the negative comments don’t bring her down.

She said: ‘When I was a kid, my mom would bully me and say mean things like, “You’ll never be a model, your legs are too fat.” So if I can take her [negativity] throughout my whole life, I can definitely take people hating on me online.

‘I’m not trying to fool anyone or make anyone feel dumb. I just want to show the world that you can make beautiful changes to yourself at any age.’