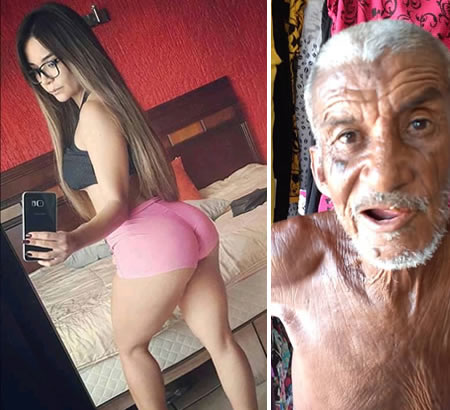 A 74-yr-old man, Francinaldo Aparecido from Brazil is one of 52 the lucky people who won the Mega lottery of HK$12.2 million but his happiness was short-lived because he died abruptly after having oral sex with his 18-year-old lover.

Before becoming a millionaire, Francinaldo was merely a gas station security guard in Sao Luis city in Maranhao State (Brazil).

Nearly a week after receiving the prize, Francinaldo decided to divorce his 69-year-old wife and started a relationship with an 18-year-old girl named Mayra.

Mayra said she truly loved Francinaldo and prepared a surprise for him in her private room along with a box of chocolate and a bottle of wine.

Thẻ 18-year-old girl had oral sex with the old man before hugging him tightly as he was kissing her profusely. Minutes later, he suffocated and died because she was holding him too tight. When the ambulance arrived, it was too late as they failed to resurrect him. The 18 year old Mayra told the police that “During oral sex, he kept kissing her non-stop. She went ecstatic and held him close to her which resulted in shortness of breath.

Francinaldo’s money will be left to his wife and 14 children. It seems like the 18 year old has wasted her efforts to gain nothing in the end.