20th March 2020 – (Hong Kong) Centre for Health Protection (CHP) announced in a media conference that there are a total of 48 newly confirmed cases recorded today. The total includes 25 men and 23 women aged between 4 and 69. The tally in Hong Kong has now increased to 256.

Among the 16 confirmed cases yesterday, the Department of Health pointed out that the 35-year-old male patient who lives in Pak Sha Tsuen, Yuen Long visited Spain from March 6th to 12th had a fever on 18th March. However, he had visited the Yuen Long District Police on the same day. He is now being treated at Tuen Mun Hospital and his condition is stable.

Dr. Chuang Tsuk-Kwan from CHP expressed that 36 out of the 48 cases visited many countries including Europe, America, and Asia i.e. Singapore, the Philippines, Indonesia, Switzerland, the United States, the United Kingdom, Canada, Portugal, Turkey, the United Arab Emirates, Austria, Belgium, and Thailand, while others are mainly close contacts. Four attended a wedding dinner with another infected patient in Discovery Bay, one visited bars in SOHO and another one visited Pure Fitness.

The 213rd case is 4-year-old girl who is the daughter of 114th patient. She was quarantined before being tested positive on 12th March. She has not developed any symptoms.

The 215th case is the husband of 181st patient who visited London together recently.

The 217th patient was in close contact with 191st patient at a dinner.

The 221st case is a taxi driver who has no travel history. He lives in Sham Shui Po He picked up customers from the airport daily while he wore mask to work everyday. Not all customers wore masks in his vehicle. He started to develop cough on 16th March.

The 222nd case is the wife of 174th patient who tested positive earlier.

The 223rd patient attended a wedding dinner with 191st patient in Discovery Bay.

The 241st case is an Australian who visited the United States and Portugal. During his trip to Portugal, he had cough before being admitted to the hospital. He was supposed to be in transit in Hong Kong but he felt unwell and he was sent to United Christian Hospital.

The 242nd case, a 61-year-old woman is the friend of 238th case. They visited Canada together before returning to Hong Kong on 17th March.

The 254th case is the 27-year-old Karate athlete who went to Austria and France for training with her team member who is the infected 172nd case. There were also 4 other team members who were also on the same flight from Thailand to Hong Kong. But all of them tested negative.

Meanwhile, there are 8 students tested positive for COVID-19. 4 of them study in U.K., Canada and U.S. respectively.

A Filipino domestic helper who arrived from the Philippines on 12th March developed symptoms on 13th March. She was tested positive for COVID-19.

As at noon today, public hospitals had reported to the Department of Health the admission of 267 patients (121 male and 146 female, aged one to 82) in the past 24 hours who met the reporting criteria of COVID-19. Appropriate tests have been arranged for the patients.

There are 363 patients under isolation currently. So far, 98 patients who had COVID-19 confirmed or probable infections have been discharged upon recovery.

(Missing information to be updated progressively) 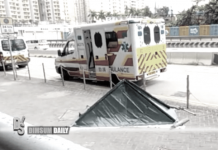